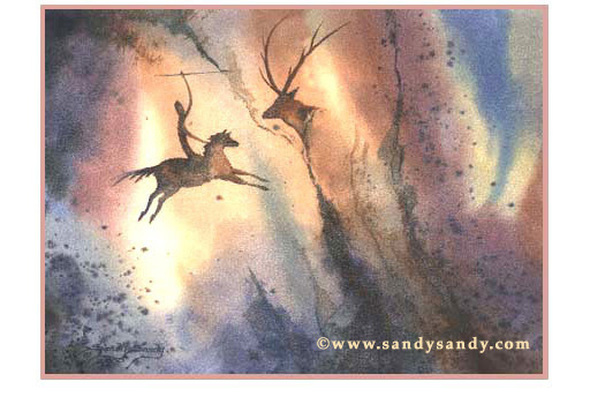 Since June of 2000, I have been blessed with The Spirit to help create these paintings. I say help create, because I believe their energy comes from a higher power and they are produced in part by a force which channels through me, not from me. These paintings started out being inspired by "Cave Art", and I called it such, but through many dialogs between myself and the paintings, these works have evolved into a more all-encompassing interpretation of "The Spirit" and essence of my subjects.
I painted this on a Friday. I was really just playing around, without a tight idea, letting the image evolve on its own. The image seemed too dark and so I took it over to the sink and scrubbed on it a bit. I pulled it out of the water and exclaimed, "It's done!" It had lightened up a little and had taken on the texture of rough stone. When I went down to select a frame, they were parted and a 16" x 20" was showing. It was the size I needed and the only one I had with a Native American inlay design. I framed the painting on Saturday and took it to a show on Sunday. The painting sold within the first fifteen minutes after it was hung. The buyers asked if they could let it hang while they looked around at the show. I could have sold that painting at least six more times before they came back a couple of hours later! The next week, I painted three more Cave Art pieces and sold all three to eager collectors that week. One of these paintings was Long Arrow And Elk Dog. And so it was that I started a new direction in my artwork and in my life. Surprises are common as these pictures unfold with The Creator's own touch. I have far too many stories, for it not to be so! ~ Sandy
"I was drawn to that one because of the power of the Spirit was there (as a Spirit Led Journey). I could also see that you have been called by the Ancestors to make a Spiritual Walk or Journey to come back to know them. The picture also showed me something else.. the Spirit Warrior in the Hunt on Spirit Knowledge." ~ Email Testimonial ~ Principal Chief, Two Bears Standing ~ 5/14/02 ~ See more about Chief Two Bears.

*What is "Animal Medicine"?
*All images and text copyright © Sandy Sandy - See copyright, guarantee and how to buy here